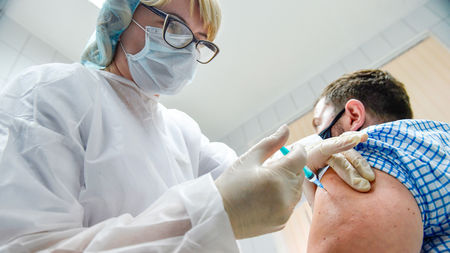 WASHINGTON-President Joe Biden on Tuesday called on U.S. states to prioritize COVID-19 vaccinations for teachers to ensure children could return to school quickly and safely, and said every educator should receive at least one shot by the end of March.

With three vaccines now available, Biden said he was confident there would be enough vaccines available for each adult in the United States by the end of May.

The Democratic president said he was upbeat about reaching his goal of delivering 100 million COVID-19 vaccine doses in his first 100 days in office, but urged Americans to remain vigilant in wearing masks and observing social distancing.

“Today’s announcements are a huge step in our effort to beat this pandemic,” Biden said in a televised statement from the White House. “But I have to be honest with you. This fight is far from over.”

Biden’s drive to get educators vaccinated more quickly comes amid a political controversy that has pitted parents pushing for schools to reopen against the teachers unions that helped put him in the White House and say the risks are still too great.

Randi Weingarten, president of the American Federation of Teachers, said Biden’s announcement was “great news for everyone who wants in-school learning.”

Biden, whose new education secretary took office on Tuesday, said increased production of the three vaccines would boost what he called a “national imperative” to reopen U.S. schools given growing mental health concerns and widening disparities caused by the challenges of remote learning.

Biden said over 30 states had already taken steps to ensure educators were vaccinated and that he was using the full authority of the federal government to direct the remaining states to follow suit.

“My challenge is this: We want every educator, school staff member, childcare worker to receive at least one shot by the end of the month of March,” he said, noting that parents were exiting the labor market in “astonishing numbers” to help their children learn remotely.

To meet that goal, Biden said the federal pharmacy program would prioritize the vaccination of pre-kindergarten through Grade 12 educators and staff, as well as childcare workers.

He said he was still pushing to have most schools open by the end of his first 100 days in office, but added that it required passage of the $1.9 trillion rescue plan working its way through Congress. The plan includes some $130 billion for the nation’s schools.

“Let’s treat in-person learning like an essential service that it is, and that means getting essential workers (who) provide that service – educators, school staff, childcare workers …. vaccinated immediately,” he said.

Cardona, the former head of Connecticut’s education department, pledged in an op-ed published by USA Today on Tuesday to convene a national summit on safe school reopening this month.

He said the department would also act as a clearing house for best practices and lessons learned during the pandemic, while updating a handbook of strategies for meeting students’ needs and addressing the loss of instructional time.

He did not endorse calls for a national summer school plan, but said academic enrichment activities, including in-person accelerated learning, tutoring, and mental health services, could start to level the playing field for the next school year.

Is Micro Influencer Marketing Right For Your Brand?