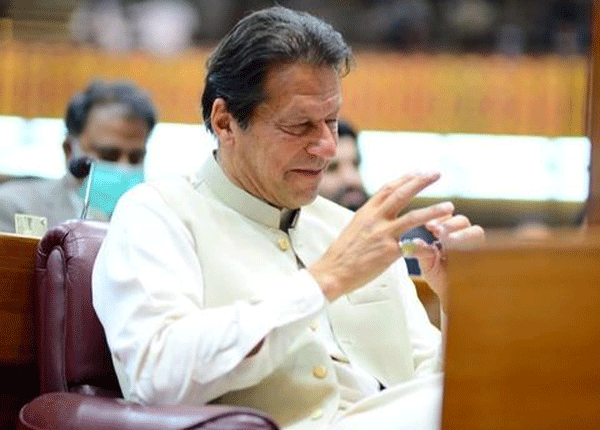 In a letter to the speaker, the premier said this month’s Senate elections had once again highlighted “the scourge of vote purchasing in the prevailing non-transparent manner of conducting elections”.

On Monday, the government had shown its intention to form a bipartisan parliamentary committee under Speaker Qaiser to bring constitutional and electoral reforms in the country.

The consensus on the formation of the body was reached between the speaker and Adviser to the Prime Minister on Parliamentary Affairs Babar Awan during a meeting.

The prime minister maintained that the Election Commission of Pakistan had failed to hold the recent Senate elections in a fair and transparent manner.

The premier has requested the speaker to form a parliamentary committee to review the election reforms bill tabled by the PTI-led government in October 2020.

He added that he wanted electoral reforms to take place before the next general polls. “The use of technology is essential to maintain transparency,” he wrote.

The Prime Minister Imran Khan noted that his party had introduced a bill in the National Assembly and also approached the Supreme Court.

“The Supreme Court ordered making the elections transparent. Unfortunately, the Election Commission has failed to fulfill its responsibility.”

After government candidate Abdul Hafeez Shaikh failed to secure a general seat from Islamabad, PM Imran in his address to the nation had sharply criticized the performance of the ECP.

The commission in its response expressed its disappointment.

In addition, the government has recently demanded the resignation of the ECP office-bearers.

Separately, the premier advised his team not to worry about the opposition alliance, the Pakistan Democratic Movement.

“Movements based on personal interests cannot succeed. I had already predicted the PDM had no future,” PM Imran said while presiding over a meeting of the party’s political committee.

The premier put off the political gatherings in Malakand and other places because of the coronavirus spike.

The prime minister pointed out that the government had completed two and a half years of its tenure.

“Controlling inflation and completing public interest projects is the first priority,” he instructed his team.

“Difficult economic conditions have passed and the PTI government will meet the expectations of the people.”

Earlier, addressing the inaugural session of the Islamabad Security Dialogue, PM Imran said the country has gone through great difficulties since 9/11.

“Our security forces have made it safe for us by rendering great sacrifices,” he noted.

The premier stressed the need for a debate on national security in the country.

He added that the goals of national security were wide-ranging.

He pointed out that five or six years ago there was no talk of climate change.

“We launched the 10 Billion Tree Tsunami Programme and the Ehsaas Programme was lauded internationally.”

He also spoke about food security, noting that it was a challenge being faced by most of the world.