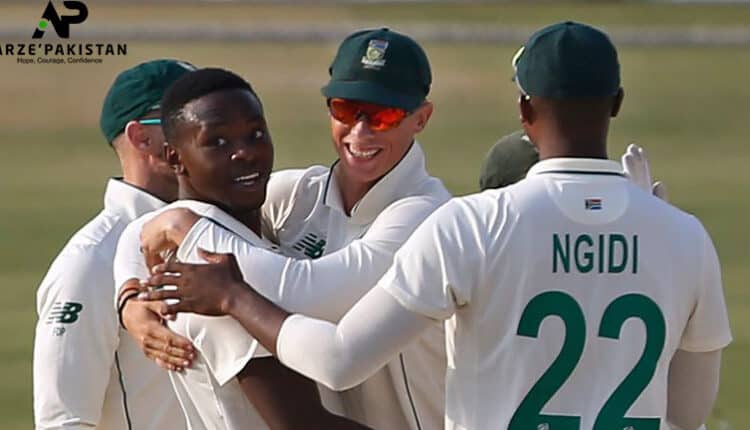 After dismissing the visitors by 220 runs on the first day, the hosts lost 4 wickets for 33 runs at the end of the game, thus Pakistan needs 187 runs to end the lead of rival team and its 6 wickets are safe.

South Africa captain Quentin de Cock won the toss and elected to bat first in the first match of the series being played at the National Stadium in Karachi. Adam Makram and Dan Elgar started the innings aggressively for the visitors but Shaheen Afridi sent Adam back to the pavilion for a total score of 30. He was dismissed for 13 runs.

Van der Dawson, who came in to bat at number three, was run out after scoring 17 runs. Former South African captain Faf du Plessis also scored a mere 23 runs and captain Quentin de Cock also failed to play a big innings. He was dismissed for 15 runs. After Dawson, Temba Bavuma was also run out, he could make only 17 runs.

Opening batsman Dan Elgar, on the other hand, played a responsible innings and scored a half-century, but he fell victim to a spinner after scoring 58 runs. Keshu Maharaj returned to the pavilion without opening an account.

Kagiso Rabada tried to resist Pakistani bowling and remained unbeaten on 21. However, no tail-end from the other end could stand on the wicket for long and the entire South African team was bowled out for 220 runs.

In response, Pakistan’s innings started disappointingly, both openers returned to the pool with a score of only 15 runs. Opener Abid Ali continued his journey of failure in New Zealand and was bowled by Rabada for just 4 runs against South Africa. Imran Butt, who made his debut after losing the first wicket for 5 runs, also fell victim to Rabada for just 9 runs. Caught out

Captain Babar Azam, the center of Pakistan’s hopes for 26 runs, also lost his wicket. He scored 7 runs and got LBW on the ball of Kishu Maharaj. As the day was going to close, Shaheen Afridi joined Azhar Ali as Night Watch Man but he was bowled out by Nortz without scoring a run. Azhar Ali is on the crease with 5 runs.

Opening batsman Imran Butt and left-arm spinner Noman Ali are making their debuts for Pakistan while Hassan Ali has also returned to the team. Imran Butt was given a test cap by batting coach Younis Khan and Noman Ali by league spinner Yasir Shah. On the other hand, South African spinner Tabriz Shamsi has returned to the team after injury.
It be noted that both the teams last met in Karachi in 2007 in which the visiting team was bowled out for 160 runs while the second Karachi Test against South Africa was played in Lahore which ended without any result.