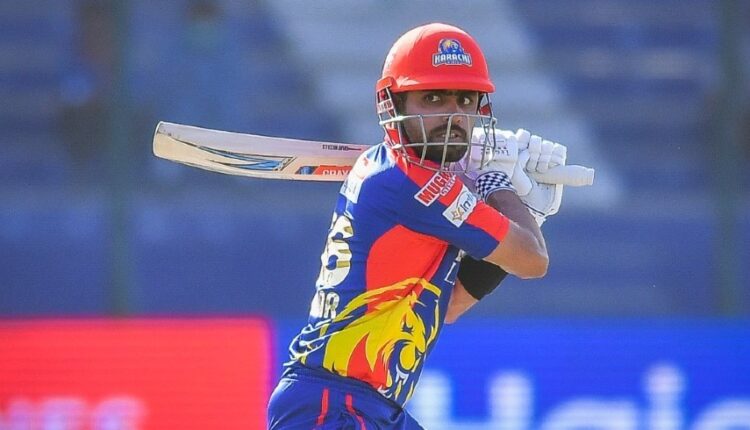 Karachi Kings’ opener Babar Azam and all-rounder Mohammad Nabi turned the game around to pull off a stunning 189-run chase for their side against Peshawar Zalmi at the National Stadium in Karachi on Wednesday.

The Kings won the match by six wickets and ascended to the top of the Habib Bank Limited (HBL) Pakistan Super League (PSL) season six points table after the improbable victory.

Chasing a daunting target of 189 runs, Karachi Kings were off to a horrible start as they lost in-form opener Sharjeel Khan on the first ball of the innings, caught by fielder Mohammad Irfan off the bowling of Mohammad Imran, for a golden duck.

The hard-hitting batsman Joe Clarke could not get going either, falling to pacer Mohammad Irfan, caught behind by wicketkeeper Kamran Akmal, after scoring 17 runs off 14 balls.

The Kings were further dented as batsman Colin Ingram struggled to three runs off 11 balls and then fell to pacer Saqib Mahmood, caught by fielder Haider Ali.

With their side in trouble opener Babar Azam and all-rounder Mohammad Nabi combined for a massive 118-run partnership off 61 balls. The duo first set about building a foundation for the chase before unleashing in the latter part of the innings.

Nabi finally fell after scoring 67 runs off 35 balls with the help of 8 fours and 4 massive sixes, caught by fielder Tom Kohler off the bowling of Saqib Mahmood.

All-rounder Daniel Christian (16 off nine balls) then joined Babar Azam towards the end as the two batsmen saw their side through with six wickets to spare.

The absolute star of the show however was Babar Azam whose unbeaten 77-run knock off 47 balls showcased his talent. The prolific batsman capitalised at key intervals to ensure a win for his side.

Saqib Mahmood picked up two wickets for Peshawar Zalmi while Mohammad Imran and Mohammad Irfan picked up a wicket each.

Earlier, After losing the toss and being put into bat first, the Peshawar Zalmi side were off to a steady start as openers Kamran Akmal and Tom Kohler guided their side to 30 runs in four overs.

Akmal loved lucky when he was dropped at point by fielder Babar Azam early in the innings off the bowling of debutant pacer Abbas Afridi.

The pacer however forced Akmal (21 off 17 balls) to edge a wider delivery straight into the hands of fielder Mohammad Ilyas, at the deep third man position, to pick up his first wicket of the HBL PSL 6.

Abbas then removed Tom Kohler (10 off 11 balls), caught by fielder Sharjeel Khan, in the same over ensuring that both openers were back in the hut.

Peshawar Zalmi were further jolted when pacer Mohammad Ilyas removed veteran all-rounder, who is also leading Zalmi today in absence of injured Wahab Riaz, Shoaib Malik (one off two balls) with a successful LBW appeal. Malik referred the decision upstairs to no avail as replays showed that the ball would have clipped leg stump and the original decision was upheld.

Batsman Haider Ali (nine off 12 balls) fell next as he skied a slower delivery from all-rounder Daniel Christian straight into the hands of fielder Abbas Afridi.

With Peshawar Zalmi in deep trouble, all-rounder Ravi Bopara and batsman Sherfane Rutherford set about the task of rebuilding the innings and ensuring that their side could reach a substantial total.

The duo combined for a crucial 82-run partnership off 59 balls to guide their side out of a tricky period. Rutherford finally fell in the penultimate over of the innings off the bowling of Mohammad Ilyas, caught behind by wicketkeeper Joe Clarke, after scoring 46 runs off 32 balls.

All-rounder Amad Butt came out swinging in the end and scored a fiery unbeaten 21 run-knock off just six balls that shifted the momentum for his side.

Ravi Bopara remained unbeaten at the end scoring 58 runs off 40 balls to ensure that Peshawar Zalmi scored a massive 188-run total despite the early setbacks.