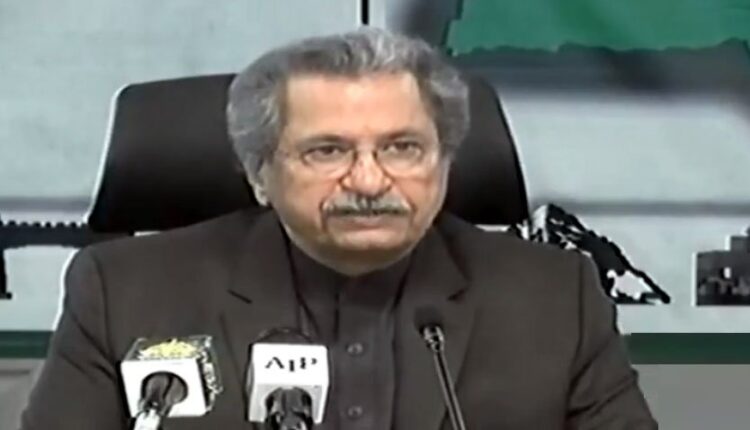 ISLAMABAD: Education Minister Shafqat Mahmood on Wednesday announced that the educational institutions in Punjab will remain closed in 9 districts of Punjab and Islamabad until April 11 amid a surge in Covid-19 cases.

The minister made the remarks at a presser following the meeting of the National Command and Operation Centre (NCOC), held to review the situation.

Education ministers from all provinces attended the meeting, wherein the health department officials briefed the participants on the current situation.

“There is a rapid surge in the cases in some districts of Punjab, particularly Lahore, while the situation is the same in some area of Khyber-Pakhtunkhwa and Azad Jammu & Kashmir,” Mahmood added.

On March 14, the government announced to close educational institutions of all grades in seven cities of Punjab, as well as in Peshawar and Islamabad for two weeks amid rise in the cases.

The cities of Punjab where the two-week spring vacations were announced included Faisalabad, Gujranwala, Lahore, Gujrat, Sialkot, Multan and Rawalpindi.

On Monday, NCOC decided to increase restrictions with implementation of high-impact interventions in cities and districts having high positivity ratio till April 11 in a bid to curb the rising trend of cases during the ongoing third wave of Covid-19 in the country.

Earlier, on March 12, Federal Minister Asad Umar confirmed that the third wave of Covid-19 had started in Pakistan and attributed the rising number of cases to the virus’ UK strain.

As per the statistics, the confirmed cases currently stand at 637,042, while the recoveries total 586,228. As many as 13,965 have lost their lives since the beginning of the outbreak.

Meanwhile, according to the NCOC, during the past 24 hours, 38,282 tests were conducted, with 3,301 people testing positive for the virus.