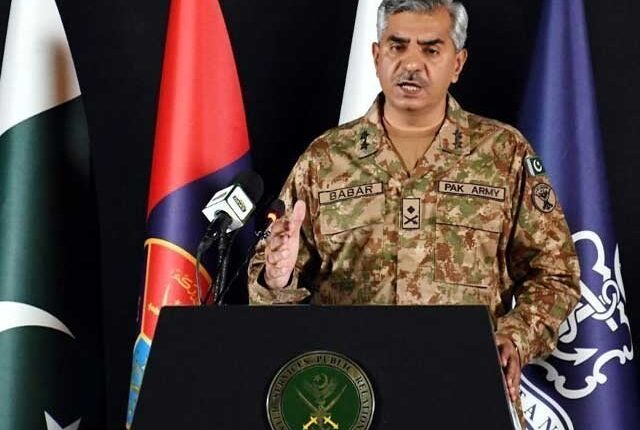 We will defend the motherland from all dangers, DG ISPR

Rawalpindi: DG ISPR Major General Babar Iftikhar has said that with the support of the nation we will always defend the motherland against all threats.

On February 27, 2019, in response to the Indian aggression and inflicting heavy losses on the enemy, DG ISPR Major General Babar Iftikhar said in his tweet that February 27, 2019 is the day of testament of the Armed Forces of Pakistan. We will always defend the motherland against all dangers with the support of the nation. It was not the numerical superiority of a nation but the determination and courage because it is the courage and determination of a determined nation that gives victory.

The Pakistan Army spokesman further said that Pakistan are a peace loving country and stands for the peace but when the time comes, every challenge will be answered with full force.

27th Feb, 2019 is testament that Pak AF, with support of the nation, will always defend the motherland against all threats. It is not numbers but courage & will of a resilient nation that triumphs in the end. Pak stands 4 peace but when challenged, shall respond with full might

On the other hand, Prime Minister Imran Khan also said in his tweet that as a responsible nation, we responded in a timely manner with full commitment and Pakistan proved its responsible attitude to the whole world. We have shown responsibility by sending back the Indian pilot, we have always stood for peace and we are ready to move forward to resolve all disputes through dialogue. I welcome the ceasefire on the Line of Control (LoC).

I congratulate the entire nation & salute our Armed Forces on the 2nd Anniversary of our response to India's illegal, reckless military adventure of air strikes against Pakistan. As a proud & confident nation, we responded with determined resolve at a time & place of our choosing

Read Also: 5G Technology in Pakistan will be introduced by 2022