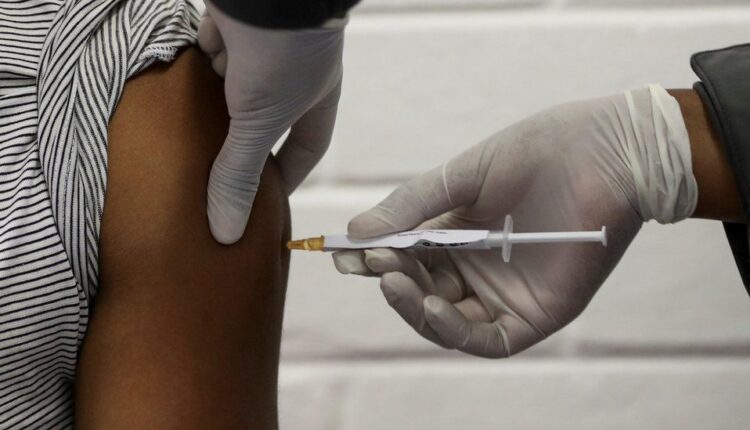 A month after immunization began, Pakistan has only administered 197,000 doses of vaccine, or 0.9 vaccinations per 100 members of the population.

Pakistan’s success at managing the coronavirus pandemic – with relatively low rates of severe disease and death – and distrust of government-led and foreign-funded public health initiatives has driven vaccine hesitancy, which could put the country’s fragile gains against Coronavirus pandemic at risk, say experts and officials.

Since the pandemic began, Pakistan, a country of 220 million people, has registered more than 586,000 cases of the virus, with 13,128 deaths, as per government data.

Its current case-fatality rate of 2.2 percent is comparable to countries such as France and Canada – and is slightly higher than the United States – but is extremely low when its very low rate of testing is accounted for.

In February, the country opened up vaccinations for hundreds of thousands of front-line healthcare workers across the country, with the arrival of more than 500,000 doses of the Chinese Sinopharm vaccine donated by the Chinese government.

Almost immediately, however, the campaign hit a snag.

“Even in the healthcare community, people thought that taking the vaccine might be harmful,” says a senior health official involved in vaccination efforts in Sindh province, which saw some of the worst of Pakistan’s Coronavirus pandemic.

The official spoke on condition of anonymity.

While thousands of healthcare workers registered themselves for the vaccine, initial rates of vaccination were slow, with doctors saying they were concerned about possible side-effects or reactions to the vaccine.

In the first two weeks after vaccinations began, only 32,582 front-line healthcare workers in Sindh, out of an eligible 78,000, had gotten their first jab of the vaccine, as per government data. In other provinces, the situation was even worse.

“Initially, people did not get vaccinated and a lot of people were concerned about reactions [and side-effects],” says Dr Ahmed Zeb, a physician in the northwestern city of Peshawar, which saw hospital intensive care units overflowing in June, during Pakistan’s first peak of coronavirus cases.

“That is a hazard in today’s world, with a number of vaccines available and people looking at all the pros and cons and analysing efficacies, and sometimes losing sight of the fact that for the individual the most important number to remember is the protection against severe Coronavirus pandemic,” he told Al Jazeera.

“And all the licenced vaccines protect against severe disease in the 90 percent [range].”

So far, a month after vaccinations began, Pakistan has only administered 197,000 doses of the vaccine, or 0.9 vaccinations per 100 members of the population, putting it almost dead last in countries where vaccination data is available, according to the Our World In Data dataset.

Moreover, as the vaccination programme moves towards getting senior citizens their jabs, the lack of public buy-in is clear.

Only 240,000 out of an estimated eight million citizens over the age of 65, or three percent, have so far registered to receive the vaccine in the next phase, according to government data.

So what is driving this hesitancy and could low rates of vaccination drive a later resurgence of the Coronavirus pandemic?

Dr Faisal Mahmood, head of the infectious diseases department at the Karachi-based Aga Khan University Hospital, says there are “many reasons” for the hesitancy but one stands out.

“In a small survey I did, the most common reason [is] concerns regarding safety,” he says. “There is an inherent fear in some to get the vaccine, in some fuelled by distrust of the data, or perhaps due to ‘news’ received from social media.”

Pakistan is currently administering doses of the Chinese Sinopharm vaccine, with 14.6 million doses of the Oxford-AstraZeneca vaccine due to arrive in two batches in March and between April and May through the global COVAX initiative.

The country has also approved the use of the Russian Sputnik V vaccine.

All three vaccines have passed peer-reviewed phase III clinical trials and are in use in at least 10 countries collectively, according to medical journal The Lancet.

“People don’t understand scientific data, if it gets in the hands of people who are not educated enough to understand it [in the media and elsewhere].”

Dr Javed said that qualified doctors in her own company had refused to take the vaccine “because they don’t have good information”.

Read More: How To Pick Gifts For Housewarming That Will Surely Impress Everyone?

Rumours of the vaccine’s safety were not helped by the provincial health minister in Punjab province, the country’s largest, saying during a press conference that citizens took the vaccine “at their own risk”.

According to the country’s health ministry, meanwhile, there has not been a single case of serious side-effects from the vaccine reported in Pakistan since vaccinations began.

The concerns around safety alone, however, may not be enough to fully explain the hesitancy, says Maha Rehman, a data analytics specialist and member of faculty at the Lahore-based LUMS University.

“Efficacy data alone is not enough to [understand the] scepticism around the vaccine rollout,” she says. “The overall level of trust in the health service provider is critical.”

Pakistan consistently ranks low on global healthcare indicators such as access to healthcare and child mortality.

It is one of two countries in the world where polio remains endemic and faces a number of other health challenges.

“They don’t trust what vaccine they will get, will it be a trial, will it be a placebo? […] There needs to be an active policy shift that everything is being done very, very transparently.”

Health Minister Sultan says that concern may not be relevant, pointing out that vaccines have been developed by international companies and are being administered worldwide.

“At the end of the day, people do know that the vaccines have not been made in a backroom by anyone, they have been made by leading entities in advanced countries who used their technological muscle [and] invest[ed] billions of dollars,” he says.

That, however, opens a different kind of distrust, say experts.

“There is this conception that it is foreign-funded, so there must be some other agenda, why can’t our own government look into it?” says Dr Javed, explaining a trend that has driven the country’s challenges in eradicating polio.

Polio vaccine refusals in Pakistan have grown because of misinformation about the foreign-funded vaccination programme being harmful to children’s health.

‘What difference does it make?’

In addition to hesitancy around the vaccine itself, doctors say there is also a sense of indifference among the general public regarding the virus, given Pakistan’s relatively low number of deaths and cases of severe disease from Coronavirus pandemic.

“There is a sense of […] why should we get it, what difference does it make, corona is not a major issue,” says Dr Adnan Khan, a public health researcher and infectious disease specialist. “Mostly it is indifference, that what’s the need to for getting the vaccine when corona was not that big a deal.”

Khan said that when he got the first dose of his vaccination last week, none of the staff who administered the injection to him had gotten the jab themselves, despite being eligible.

“Even now, I still run into people who say that what is this corona that you are talking about? I still wear my mask and I am probably the only person who is wearing a mask in an overwhelming majority of situations.”

During the country’s first peak of coronavirus cases in June, Pakistan saw cases rising by more than 6,000 each day, with daily deaths peaking at 155 on June 19.

At the time, intensive care units in main cities were beginning to turn patients away for a lack of ventilators.

As cases subsided, however, so did social-distancing measures and government-mandated restrictions on gatherings.

The country’s second peak hit in late November, and appeared to be shallower and more sustained, with cases still not back down to the levels seen in between the peaks.

The slower rate of cases and deaths, say experts, has led to public indifference regarding the seriousness of the virus.

“There are people who don’t even believe in Coronavirus pandemic here, so how would you find people to take the vaccine?” asked the senior Sindh health official.

The risks created by the rates of vaccination remaining low, however, are very real.

“The risk to Pakistan or any country where the vaccination rates remain low is that here will be chances of a resurgence and the resurgences will impact our businesses [and our health],” says Health Minister Dr. Sultan.

“Our ability to resume normal [life] is heavily dependent on having community-level immunity and the best way to get that is to get vaccinated.”

Dr Mahmood, the infectious disease specialist, agrees, although he also stressed that vaccines were not a silver bullet for the Coronavirus pandemic and that continued social-distancing restrictions were required.

“Without the vaccine, we will always be under the threat of more surges,” he said. “That is not to say that this is not possible even with the vaccine, however, the chances do drop.”

For the government, the issue of the slow vaccine distribution is more a question of time and momentum than one of serious vaccine refusal.

“The hesitation is based on doctors and nurses looking and asking each other whether their peers and opinion leaders have taken the vaccine,” says Dr Sultan.

“This is not strange, it happens in every country and is happening in Pakistan as well.

This week, daily vaccination numbers went up to about 15,000 per day countrywide, from 3,000 per day earlier in the campaign, according to government data.

Doctors, too, say they are beginning to see the campaign pick up momentum.

“Once people started getting the vaccinations and they saw that people are not suffering side effects [it has gotten better],” says Dr Zeb, the physician in Peshawar.

“The awareness is getting better and the number of people who are getting vaccinated is increasing.”

Zeb, who works with a doctors’ union, said his organization’s data showed that only 36 healthcare workers were vaccinated in the first four days of the campaign in Peshawar but that there were currently between 70 and 80 doctors being vaccinated each day at his hospital alone.

As momentum for vaccinations picks up, Pakistan’s challenges may shift from being demand-side to supply-side.

Currently, the country has confirmed supplies of roughly 15.85 million doses of the Sinopharm and Oxford University-AstraZeneca vaccines (both requiring two doses per person) arriving through Chinese government grants and the COVAX initiative by the end of May.

In a country of 220 million, that will not be near enough to cover enough of the population to establish herd immunity.

“By the end of the year, our estimate is that […] we need to have vaccines available for […] about between 45 to 50 million people,” says Health Minister Sultan.

“We will get those from whatever entities make it available, largely COVAX and then whatever [else is available].”

Pakistan’s government has also authorised the private sector to acquire government-approved vaccines for sale, although no company has yet been able to do so due to a shortage of global vaccine supplies.

“If someone wants to buy it separately, we will not stop them, that path is available,” says Sultan.

“We will control the prices, but the price control will be reasonable.”

Others in the sector, however, are sceptical that the distribution of vaccines will remain equitable if there is a shortage of free government vaccines and an open private market.

“The haves will have it and the have-nots will not be able to afford it,” says Dr Javed.